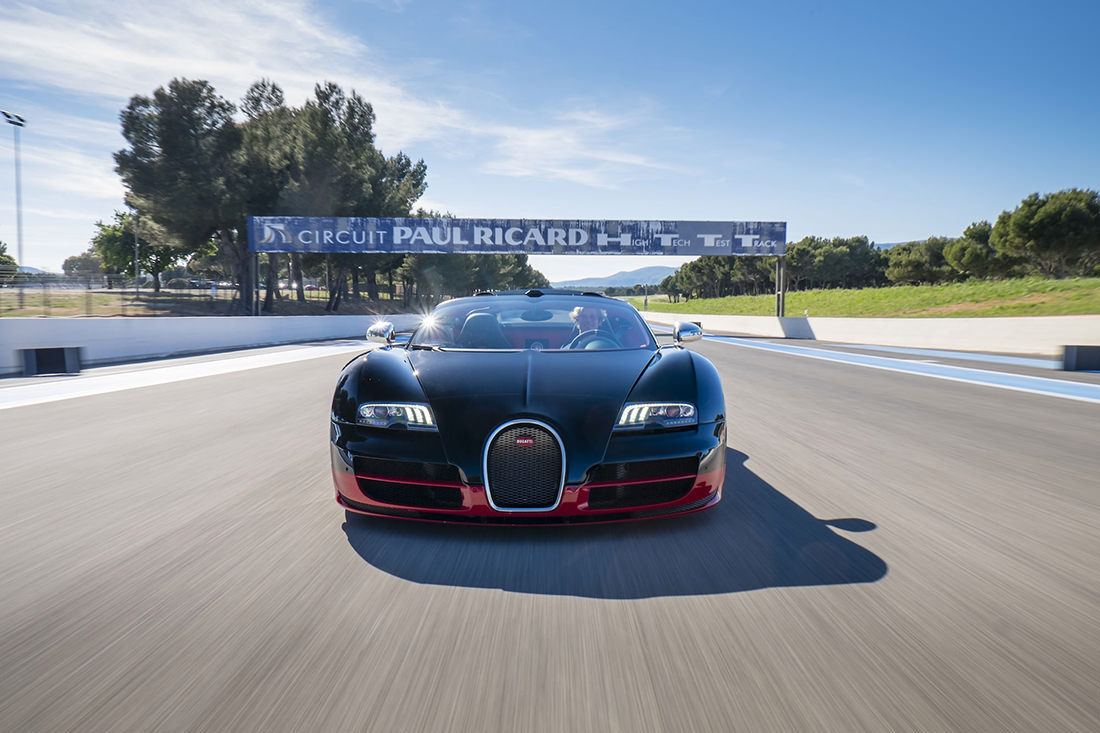 For almost 10 years, this nonstandard engine tries very hard to be as refined as possible despite its accelerating performances of unparalleled roughness. We took the wheel of this outstanding supercar on the Paul Ricard circuit, one of the rare racetrack where this monster, born in Alsace, can make use of its 1200 horsepowers without too much restraint.

Everything started by the iron will of a single man at the end of last century. Leader of the Volkswagen Group, Ferdinand Piech achieves almost everything he is undertaking and his appetite for growth seems limitless.

To fulfill one of his craziest dreams, this german engineer – sometimes visionary – bought Bugatti just before the switchover to the twentieth-first century with the only objective to scrupulously respect the original slogan of the brand dear to Ettore Bugatti: « Nothing is too beautiful, nothing is too expensive ». It is with this principle that Bugatti performed during the automobile Golden Age and broke all the records, be it on road or on circuits.

By reviving the brand, Ferdinand Piech wanted to conceive a superlative automobile, able to beat all its competitor, be it in top speed or power. The Veyron came to life in 2004 with 1001 horsepowers and a top speed of 407 km/h, a first at this time. The car was directly listed in the Guinness Book of Records, and in the garages of the most prestigious.

New standard to beat, this Bugatti Veyron was attacked from all sides by a competition determined to beat its top speed and its acceleration capacities.

Some achieved it, but not during a long time: the Veyron has evolved throughout its career to make sure that it will be remain unstoppable, be it only at the top speed level. Launched at the beginning of last decade, the Super Sport version enhanced the power of the W16 quadriturbo to 1200 horsepowers for a top speed promised at 434 km/h.

Nowadays nobody achieved to break this record, even if some craftsmen got closer and closer with engines requiring F1 driver’s abilities to master them. The Veyron is now available in an ultimate version: the Grand Sport Vitesse that features a retractable roof enabling to feel your hair in the wind and above all, the 1200 horsepowers in your back.

Unlike Ferrari, Lamborghini, McLaren P1 and others, the Bugatti Veyron Grand Sport Vitesse has not only been conceived to offer the best performance possible on circuit. The special feature of this unique engine is that it remains confortable and easy to drive in all circumstances. While driving this 2 millions euros supercar, what strikes you the most is that you can easily master it and drive it peacefully while feeling your hair in the wind on a country road.

The shock absorption is flexible, the steering is light and the driving is a lot softer than on others supercars. This docility is staggering for an engine able to reach 400 km/h without the roof, which, besides, features a finish worthy of a Rolls Royce.

As soon as you step on the gas, your peaceful drive turns into a suffocating catapult. When the 1200 horsepowers work in unison, the boost engaged by the machinery is a true physical trial. As in a roller-coaster, your belly tickles. The sounds are worthy of an astonishing machinery and cover a wide range of tones. As soon as you release the gas, you are back onboard a calm GT, confortable and easy to drive.

On the Paul Ricard circuit, the car easily links big slow-downs thanks to huge discs and reaches 340 km/h in the Mistral straight line. On this track, even the 24 heures du Mans fastest cars cannot reach this speed. And the Bugatti is able to keep pace during a full day driving. It’s the total split. No other supercar can drive as fast while providing such a level of confort on the road.

Even 10 years after its introduction, the Veyron is all alone. From now on, it remains less than 20 examples to sell before the end of its career. Unless Bugatti decides to go even further in the future, it will remain a unique engine in the History of the Automobile. 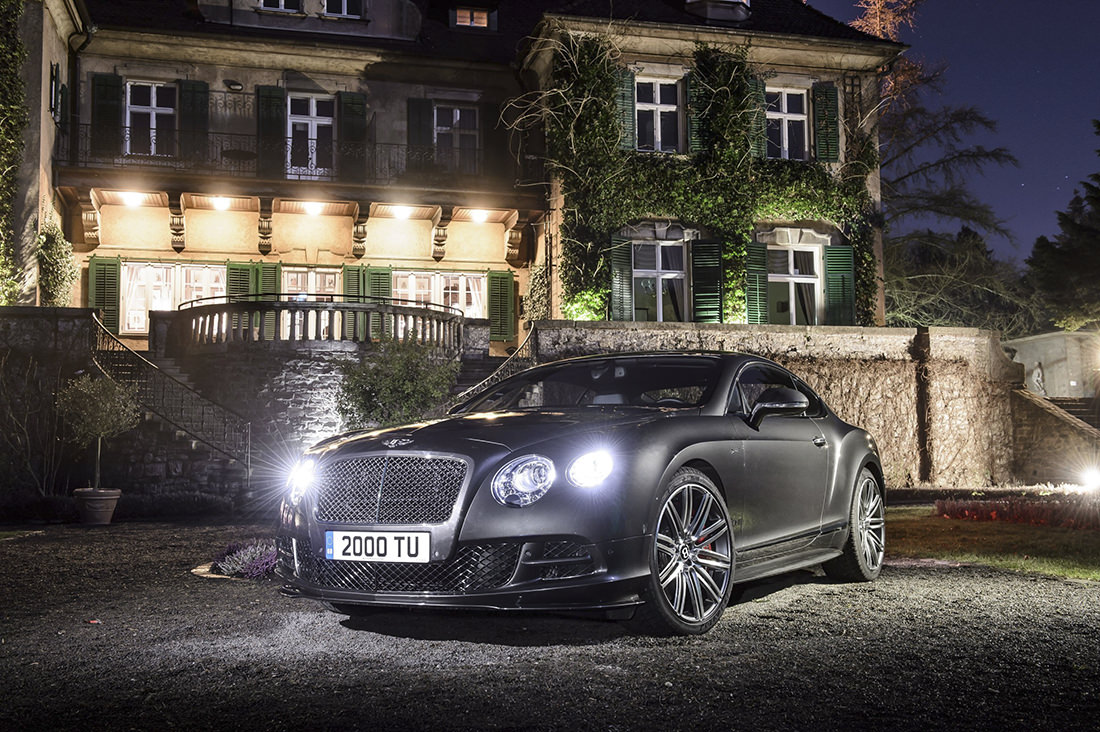 Read More
Ahead of Geneva’s international motor show, Bentley has announced a suite of luxury options and specification updates to…
Read More
0
0
0
0 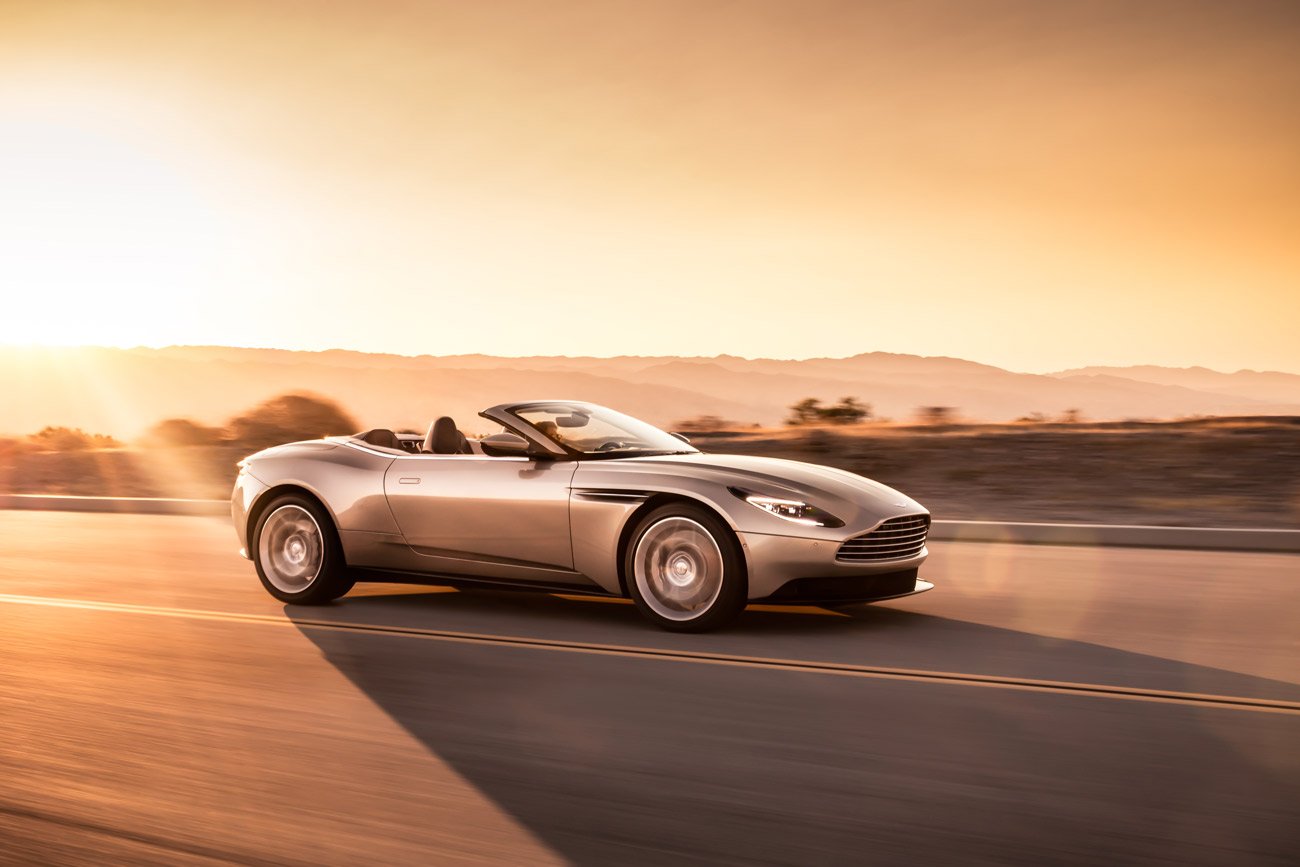